Recently I had an issue migrating a Windows Server from a physical system to a VM that had smaller than 2 TB volumes but the disk were configured as GPT. Additionally the systems was using EFI firmware. Below is the VMware KB confirming that you cannot use the VMware converter to P2V machines that use either GPT or EFI.

The machine had to be converted. After researching the issue I found some pretty silly and almost maniacal solutions. One suggested booting a VM and the live machine from a Linux disk, copying the C drive over the network, and then using the Windows disk to create the boot records and all sorts of other things. I like to keep it simple, and easy..

1) Download and install StorageCraft Server edition trial on the source server. You will need the StorageCraft Recovery ISO to restore the system into a VM so you will need to apply for the full featured product trial or purchase the software.

2) After installing the software reboot, and then set the below registry key under current control set and control set 1-2. Take note of the current value before changing because you will need to change it back. Do NOT reboot! Create a full backup either backing up the server to a network share via UNC path, or to a USB drive that you can pass through to a VM. Once the backup is complete go back to the three registry keys you changed and set the value back. Failing to do so will prevent the server from booting should you need it going forward.

3) Create a new VM and configure it as you would any VM. Mount the StorageCraft Recovery ISO and boot the VM. You will need to create the disk volumes first using the StorageCraft Recovery ISO, and they must be as big or at least 1 MB bigger than the disk you are restoring from.Under Tools > Networking you can map a drive to the UNC path or restore from a local USB disk you pass through to the VM. When you perform the restore using the wizard the last page before starting the restore will show the options per the picture below. Check all of the boxes shown and start the restore. 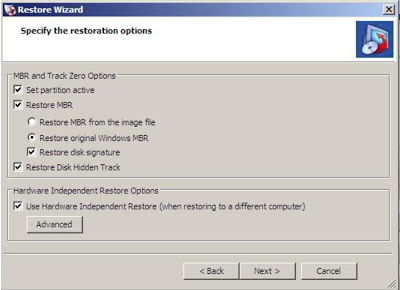 4) Once finished reboot the VM and you should be all set. Install your VMware Tools and remove any hardware agents such as HP Management Agents or Dell related items as the hardware no longer exist. Failing to do so could cause the HP or Dell hardware agents to cause extreme CPU or memory usage.

You can find more information from StorageCraft regarding Hardware Independent Restore (HIR) HERE.

vSphere HA error: “The number of heartbeat datastores for host is 1, which is less than required: 2”

How to Install the VMware Tools on CentOS 6

It is very important that you install VMware Tools in the guest operating system. With the VMware Tools installed VMs support significantly faster performance, time synchronization, and other enhanced features. Below are the steps to Read more…

VMware SRM: The guest operating system ‘centos64Guest’ is not supported

Recently, I ran a test of a SRM Recovery Plan for a new set of Linux VMs I inherited. The first test didn’t go so well and returned the error “Error – The guest operating Read more…